In this article we will cover how to provision virtual machines and automate installation of servers using Vagrant, Hyper-v and Ansible. This can came in hand if you want to simulate a infrastructure provider and don't want to use cloud. Maybe you have enough RAM and processor power to run it locally.

Before we get started lets cover some basics.

Alternatives to this method

If you don't want use you local machine, and maybe want to mimic production workloads you can use Terraform or Pulumi as alternatives to vagrant. This two software are more capable of provisioning in cloud environments like AWS or Azure. This way you could as with minimal effort reuse it in production on your work. The downside is that you have to pay for resources you use and depending on usage could not be cost effective.

As of the ansible part it covers post provision, so you still have advantages by learning this tool, even in cloud environments.

If you just want a dev environment with local services like database, then the best and more productive alternative is to use docker and docker-compose to declare your services and run it in just one command. This performs better and as I said is more straightforward.

You can also replace hyper-v with other VM provider.

Vagrant is a virtual machine provision tool that can automate the creation of VM's with predefined configurations. In this tool you can replicate a environment without manual intervention (mostly)

It works by interpreting a declarative configuration file that describes your requirements, packages, operating system configuration, users, and more. It will download a VM disk from the internet and use it as a base for cloning and creating the VM.

Works on Windows, Mac and Linux

Hyper-v is a type 1 hypervisor build in in Windows Server, Windows >= 8 and is a performant free way to run virtual machines, if you already have a windows license.

The type 1 means it runs directly on the hardware, and even the host OS also runs as a VM with elevated privileges. Because of this your Windows 10 (Host) machine will run as a VM, but don't worry, it has access to hardware acceleration and even running games on it should not have a big performance drop.

Its oriented on server workload so you don't have more customer oriented functionality like easy USB access in the guest VM, but you can run GUI software on Windows and Linux, although a little laggy because is a Remote Desktop session.

Note: In the Microsoft documentation it says is available only in Pro, Enterprise and Educational editions of windows, but in fact you can enable it in Home edition. For example docker for windows in the WSL2 backend uses Hyper-V and you can nowadays do it in Home editions. For more info check https://www.makeuseof.com/install-hyper-v-windows-11-home/

I'm not covering all differences to alternatives like virtualbox and vmware play or workstation, but be in mind that it has a limited support for guest operation systems, like windows XP and some old Linux kernels, if you want a broad range of support you can use virtualbox or vmware which are type 2 hypervisors.

Ansible is an automation configuration tool that do not require an agent to run in the target machine. It connects to the machine thought SSH and runs commands and python configuration modules.

The only requirement is a previous installation of python in the machine, which most Linux distributions offer out of the box.

The majority of ansible modules and extensions are idempotent. That means it only performs operations when the state of the target machine differs from the desired state, which basically means you can run the ansible playbook many times that it will sync with the machines.

With ansible you can save time, eliminate repetitive tasks, have fewer mistakes and improve collaboration.

It works by reading configuration files and applying its modules states in target machines.

It has build in modules for apt get management, file management, script, managed system services and much more.

Note: Is not in the scope of this article to teach you how to use this tools, previous basic knowledge is good

The first thing we need is the Hyper-V enabled. On Windows 10 or 11 Home follow this instructions

Once you reboot you are good to install vagrant.

Once installed let's do some basic machine provision. Create a new directory, you can name it as you whish. I call it infra-hyperv

In the folder you create run the command

You can check the machine running in Hyper-V manager: 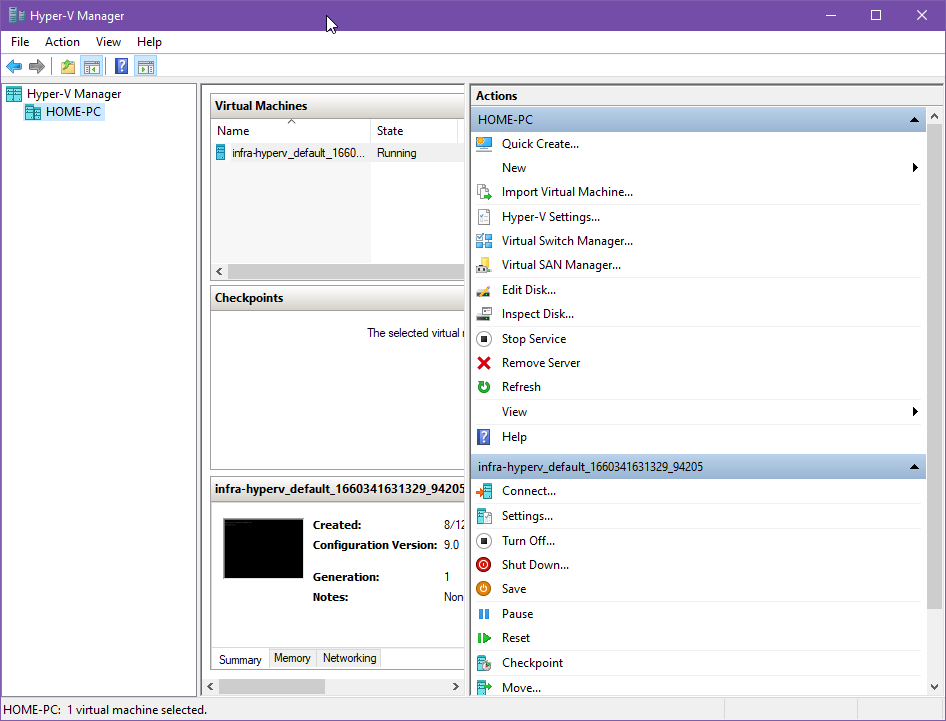 Vagrant adds the folder name to the machine name to avoid collisions.

You can ssh into the machine with the command: 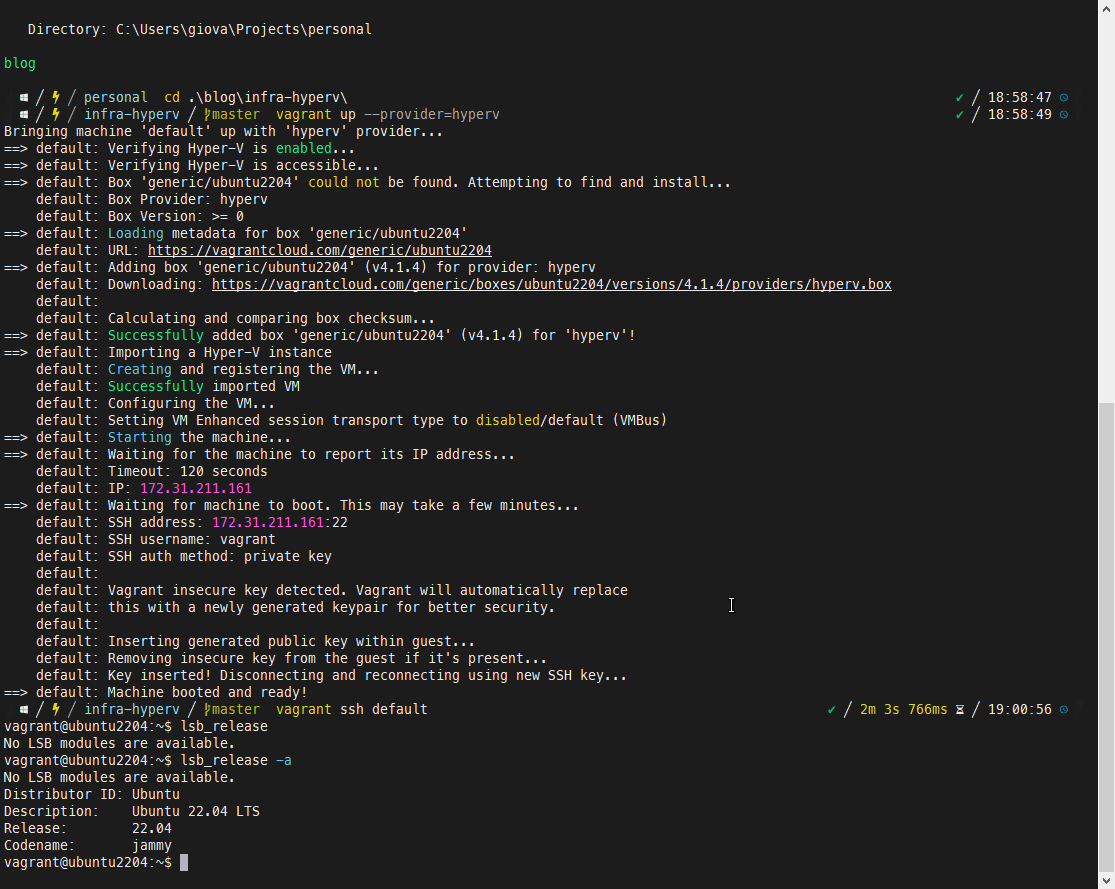 When vagrant creates the machine it will generate a ssh-key to authenticate with the guest.

The private key is created in .vagrant/machines/default/private_key

Also the disks, snapshots and other information is in the .vagrant folder. So you must ignore this folder in version control systems.

Good, now there is a problem: Hyper-v will add a different ip to your machine each time it boots. That's a problem because we don't have a way to tell ansible this ip address from vagrant, we need a way to overcome this.

This is not so simple as it may sound. In other providers vagrant can do it simpler using the Vagrantfile, but in hyper-v there is more to address.

Fortunately we can automate most of this process.

This process can be done once, manually but lest do it in a script called in the Vagrantfile.

Then add the trigger on top of the Vagrantfile config section.

Install the reload plugin with the command:

Create a script to be executed: ./scripts/set-hyperv-switch.ps1

Configure the machine name in the hyper-v to be default instead of a generated one, so the script above can work. In Vagrantfile:

Configure the Vagrantfile to call the trigger, add just below the previous trigger created

Configuring a static IP is an OS-specific task, so this procedure should be adjusted to suit the specific guest OS. We are using ubuntu:

Create a script in scripts/configure-static-ip.sh

With the above script in place, add something like this just below the trigger definitions that we added earlier:

Choose the Default Switch when prompted

To use multiple VM's we need to adapt the scripts and Vagrant file. The results are as follow:

Now is time to use ansible for the configuration of the VM. If you already know ansible this should be straightforward.

To get a WSL Ubuntu working check

After that open a WSL shell and install ansible with the command:

We will create a directory ansible and will add a inventory file name inventory/inventory.yaml

That is because WSL doesn't have access to the VSwitch the VM's are plugged. We can fix that with the following power shell:

We also need to fix the private key permissions because SSH required it. First we need to enable metadata attribute in the c: volume to permissions work

Now change the group and permissions to be the same as your username, my is giova

Now you can finally test the connection:

If is working you get the output:

Create the folder structure below:

In the file roles/apache/tasks/main.yaml add the yaml configuration:

In roles/apache/template/index.html.j2 add the html:

We created a role that

In site.yml add the code:

This code applies the apache role we create for all hosts. We need the become set to yes to be root because your ssh user is vagrant

Now run the playbook with the command:

You can check all code for this article in https://github.com/giovannicandido/blog-hyperv-ansible-vagrant

By using the tools presented in this article you can play with infrastructure automation and developer environment though virtual machines.

We cover up some limitations in Hyper-v and WSL in order to have the most streamline experience possible. Fortunately most of the procedures can be automated after you cover all the requirements.